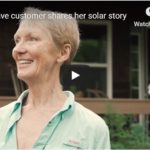 The Gilberts weathered the Nashville tornado with solar and Tesla Powerwall.

LightWave Solar installed a solar and battery system for a home in Memphis, TN.

The Culwells supply their home’s electricity from solar and Tesla Powerwalls.

When Allie & her husband built their home in Brentwood, Tennessee, two years ago, they had their children in mind, […]

When Ira Chilton decided to build an artist and design studio behind his home in Nashville, Tennessee, he had no […]

Matthew Lipton
20:46 22 Jun 20
Lightwave Solar installed a 10 kw system on my building in Lebanon. The installation crew was very professional and completed the install in a morning. Lightwave handled all the permitting and negotiations with TVA/MTEMC. I now have an app on my phone that tells me how much power my panels are generating since they were installed.

Peter Schulert
16:58 22 Jun 20
The folks at LightWave Solar are awesome. They were patient and very responsive to my long list of questions prior to signing the contract. After signing the contract, they kept me updated on progress and walked me through steps that required my input on the permitting process. They made me aware of the current step and the next step so I knew what to expect. The installation crew was knowledgeable, efficient, friendly, and went overboard to make sure the installation met my needs. The accounting folks were also great to interact with. Every aspect of my solar purchase went smoothly thanks to the great people at LightWave....from the initial sales, business office, and installation crews--all of them make customer service a PRIORITY.

Mike Woodside
14:00 21 Jun 20
One of the best companies hands down. When it comes to light wave solar there is no other companies that can compare

justin harris
13:20 04 Jun 20
We had a great experience with Lightwave. They installed an add on system of 5kW along with a Tesla Powerwall battery. From the initial presentation to the final project completion, they all worked together and everyone on their team seemed truly happy to be engaged in this new industry. They are true professionals and I was glad we selected them. In addition to having a high tech back up system for my home, I am now off grid about 30% of the time. Amazing.

Quentin Humberd
11:06 06 Dec 19
Wonderful experience from beginning discussions to project completion. On time, on budget and a pleasure to work with these folks

David Goodridge
19:50 31 Oct 19
LightWave provided excellent service from design through applications through installation. We are very happy with the performance of the system.

Michael Dennis
01:20 04 Aug 19
LightWave Solar, LLC installed a 10 kW Array for us and did an excellent job! They completed the Array installation on time and with in budget.

Brian Nothnagle
18:49 23 Jul 19
The staff was incredibly friendly and knowledgable. in addition to keeping the area clean , we are very happy with the work and the price.

Denis Savouray
13:11 30 Nov 18
Light Wave Solar is terrific. All their people were great to work with, knowledgeable and on- the- ball. They were everything i could have asked for and i couldn't be happier with the system they installed. So far it is working just as i hoped!

Jeanie Stephenson
23:00 26 Nov 18
I needed LightWave's help after a wind storm caused a tree to fall on my house. The tree destroyed ten solar panels on my roof. LightWave's technicians visited me to assess the damage and plan repairs. LightWave's project manager took over from that point. After the design was complete and approved, the installation crew completed the job in a single day. Every LightWave representative was pleasant and professional. I would recommend them to anyone who needs their services.

Mike Wiedemer
18:41 25 Oct 18
The whole team at LightWave Solar did an all-around excellent job! They showed up on time as expected and communicated everything very clearly on what I can expect to see and happen. They were all very professional and courteous throughout the entire process. I am already seeing MUCH lower electric bills. Thanks again to everyone at LightWave Solar, I greatly appreciated your services.

Nick Mielnik
18:41 22 Oct 18
The entire team at LightWave Solar went above and beyond to ensure that our solar install was done on time, on budget, and to our satisfaction. Professional in every way. I can't get over how seamlessly they have integrated everything to our 1960 built home. Very well done. An added bonus is their handling of the necessary licenses, myriad forms and paperwork and approvals from local power company and TVA. These guys deserve 10 stars!

Mark Fournier
13:19 08 Feb 18
We installed a 10 KW solar panel array on the roof of our home this past fall. The process required coordination between us (the customer), the local electric company (Nashville Electric Service) and the Tennessee Valley Authority (TVA). While this may seem daunting, it turns out that apart from signing a few routine documents, the process requires little to no effort on the part of the customer: Lightwave Solar takes care of all the details. Their attention to those details was impressive, which meant the whole operation was smooth, professional and basically worry free. The physical installation itself is a marvel of craftsmanship and technology. Lightwave Solar fully earns their five star rating and I recommend them without reservation.

Greg Gough
02:27 20 Jan 18
My first month's savings was over $100. This is in spite of shorter fall days, cloudy days, and rain. The shortest day of the year is in late December. Its best performance will be in the spring and summer. I am very pleased with it.

Gerald Dooley
18:26 27 Oct 17
Lightwave's staff was professional and responded to all of my concerns. Installation was a breeze and their followup after the system was installed has been rapid. I highly recommend LightWave for any solar project.

The North American Board of Certified Energy Practitioners (NABCEP) is the most respected, well-established, and widely recognized certification organization for U.S. solar professionals. Our team includes 8 fully certified NABCEP Solar PV Professionals – more than any other firm in the region.