“Our rooftop solar panels provide 15% of the store’s energy. Utilizing this clean and abundant resource is one of the ways we continue our legacy of sustainable business and building practices.” – John Dyke, The Turnip Truck Founder & Owner

In 2020 West Nashville welcomed Turnip Truck to the neighborhood. The locally owned full service natural grocer opened its third store on Charlotte Avenue, just as COVID-19 was hitting and on the heels of a tornado which destroyed much of the store’s new equipment.

“Against all odds, we opened one day earlier than originally planned,” says Turnip Truck CFO Adam Williams. “More than ever, we are committed to keeping our shelves stocked with local, natural and organic foods that our customers love,” Adam says. 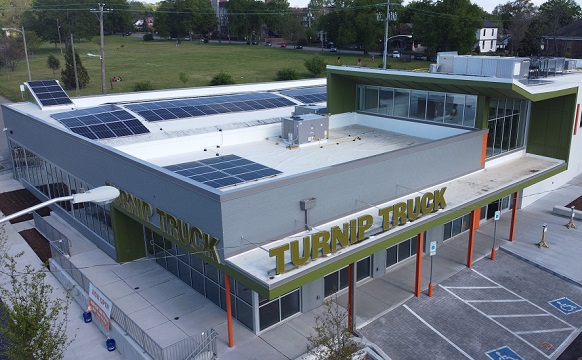 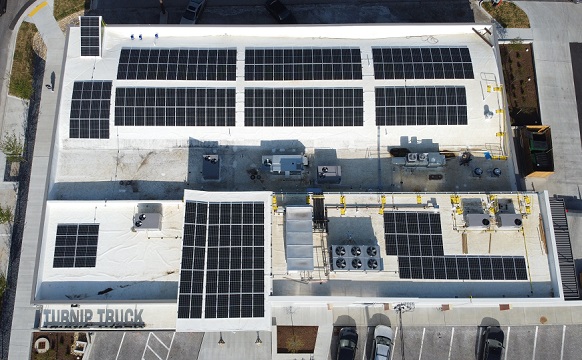 Turnip Truck opened their first store in East Nashville in 2001 and their second store in the Gulch in 2010. Founder John Dyke and the team had always wanted to add solar to their business, and they decided to make it happen with the new project.

“We made sure to include solar in the budget for the Charlotte store,” Adam says. “In fact, to get the SBA 504 loan we wanted, our solar system had to reduce our energy use by at least 15%,” he explains.

With limited roof space, that was easier said than done, but LightWave Solar worked closely with Turnip Truck to accomplish the 15% goal. The system has 214 high efficiency solar panels strategically placed to avoid shading from walls and equipment. LightWave even secured solar panels to the barrel vault roof!

Turnip Truck expects to see electric bill savings of about $5,000-6,000 annually. However, the environmental benefits are equally important to the owner, staff and Turnip Truck customers.

“Solar energy fits in with our mission of keeping environmental impact in mind with our decision-making,” Adam says. “Clean and local food have a lot in common with clean and local energy in terms of cleaner water and soil and healthier people,” he adds.

With more than 100,000 kilowatt-hours of solar generation per year, Turnip Truck will reduce its carbon dioxide emissions equal to planting 64 acres of forest. 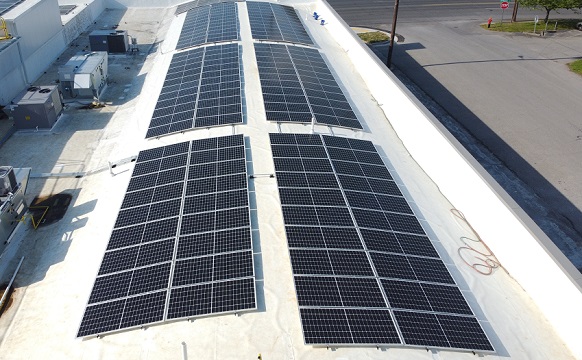 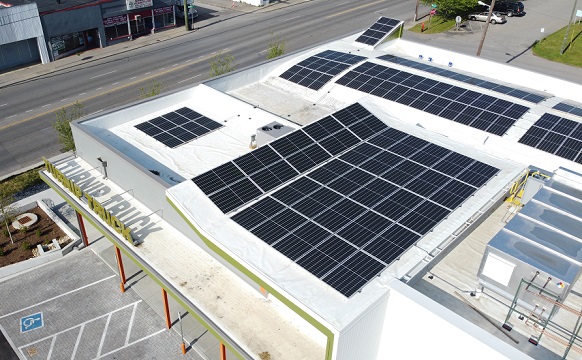 Turnip Truck is considering solar energy for their East Nashville location as well, though rooftop solar panels would have to share real estate with the store’s rooftop beehives! Other mounting options include solar parking canopies and solar awnings which would provide much needed shade for customers.

“It was great working with LightWave to complete our first system, especially after consulting with them for many years,” Adam says. “We’re really happy to see our solar generation online and be able to track its performance,” he adds.

"Lightwave has been an awesome partner to deploy the solar+battery solution. Not only are they highly professional in responsiveness, meeting dates, and the installation itself, but they also feel like a partner, constantly listening to input from my end and applying it when needed..." -Julio Márquez